Advertising Council Japan (社団法人ACジャパン?, Ad Council Japan, AC Japan), formerly named Japan Advertising Council (社団法人公共広告機構 Kōkyō kōkoku kikō?, Japan Ad Council) till June 30, 2009, is a private non-profit organization that distributes Japanese public service announcements on behalf of various sponsors, including both non-profit organizations and government agencies.
It was established in 1971 in Osaka, Japan as "Kansai Advertising Council (関西公共広告機構 Kansai Kōkyō kōkoku kikō?)" and had activities in the Kansai region. Then it was reorganised as the nationwide private organization named "Japan Advertising Council (社団法人公共広告機構 Kōkyō kōkoku kikō?)", then renamed to the present name on July 1, 2009.
Currently, AC Japan is headquarterd in Nishi-ku, Osaka, and has branch offices in Sapporo (Chuo-ku), Sendai (Aoba-ku), Tokyo (Chuo-ku), Nagoya (Naka-ku), Hiroshima (Naka-ku), Fukuoka (Chuo-ku), and Naha.
Like the US counterpart, the Ad Council, Ad Council Japan generally does not produce public service advertisements itself; rather, it acts as a coordinator and distributor. Ad Council Japan accepts requests from sponsor organizations for Japanese advertising campaigns that focus on particular social issues.
To qualify, an issue must be non-partisan and have Asian and Japanese national relevance. Ad Council Japan then assigns each campaign to a volunteer advertising agency that produces the actual advertisements. Finally, Ad Council Japan distributes the finished advertisements to media outlets.
During the TV coverage of the 2011 Tōhoku earthquake and tsunami events, the vast majority of advertisers withdrew their advertising, resulting in a massive increase in filler advertisements by AC Japan, many of which promoted traditional Japanese virtues, such as mutual help and the importance of greetings.[1] 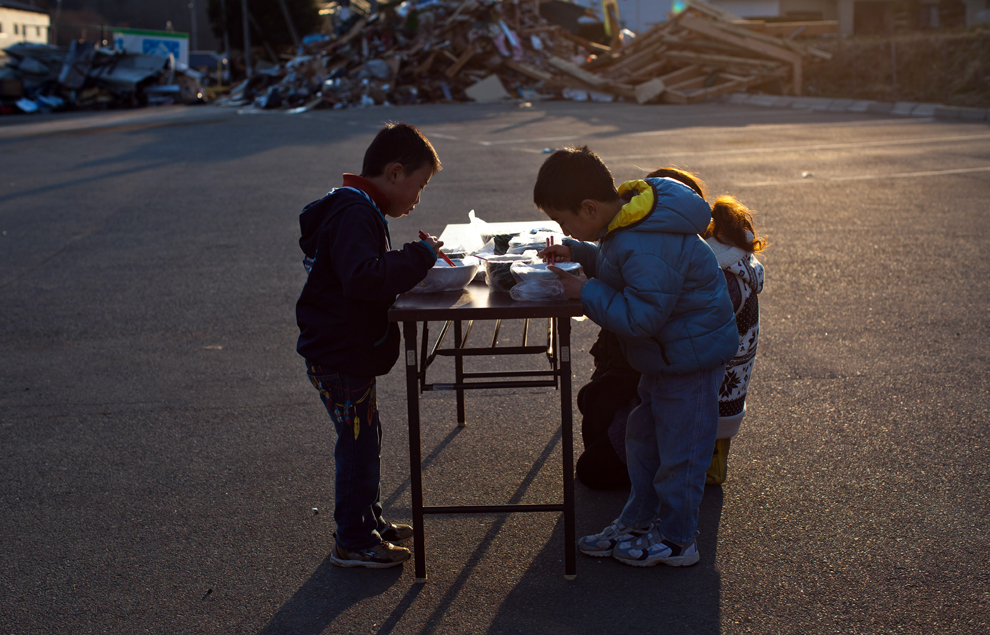 
Many of the bronze sculptures lining Osaka’s main street known as the “Champs Elysees of the Orient” got some artistic pop on Monday. Working in the dark of night, someone mysteriously gave the naked sculptures a wardrobe makeover, dressing about two-thirds of the 29 models in splashy red outfits late Sunday.

A lot of care went into the work. The dresses were premade in red fabric or otherwise dyed a pinkish red, and fitted to each statue, most of which are life-size or slightly smaller. Long dresses hung off statues of older women while shorter frocks hugged young girls posing mid-prance. The Midosuji Network, an organization responsible for promoting the two-kilometer (1.25 miles) cosmopolitan strip, says this is the first time such an act occurred, and has not received any witness accounts.

Artistic vandalism? Depends on whom you ask.

To some city officials, it’s art worthy of its own exhibit.

The craftiness impressed Osaka Mayor Kunio Hiramatsu, who said he suspects the mystery person is trying to convey a message. At a news conference on Tuesday he said, “I might get in trouble for saying so, but I wish I could have seen them.”

City workers removed the clothing on Monday morning after a worker at Midosuji Network noticed that red outfits had been put some of the 29 female bronze statues—19 to be exact. The Osaka city government was notified and the case filed with the city police, according to local media reports.

The mayor didn’t excuse those responsible entirely. “We can’t have people think these statues are free canvasses,” he was quoted as saying by state broadcaster, NHK.

But Mr. Hiramatsu said the city won’t file an offense report and asked the “perps” to come forward so he can invite them to participate in a design event Midosuji has organized for September.

The wardrobe in a way complemented the culture of Midosuji Avenue, a gingko tree-lined artistic hub that hosts a row of cafes and boutiques. The 29 statues are gifts from major Japanese corporations, installed starting in 1992, for the purpose of adding further cultural ambiance to the street, and include creations by French sculptor Auguste Rodin and Japan’s Kotaro Takamura.

Still, others weren’t quite so moved by the new outfits.

“It wasn’t an aesthetic sight,” said a spokesman of Midosuji Network’s administration who saw two statues in front of the organization’s headquarters. “The outfits looked like second-hand clothing that had been dyed red. Some pieces were tied on to the statue with red vinyl tape.”

In April, a Naoki Tominaga statue of a girl carrying a basket of grapes had been scraped and punctured in an act of vandalism, but none of the sculptures were harmed in the clothing incident.